Gene had 1,000 square feet of closet space in his North Hollywood home.

Public Cowboy No. 1 The Life and Times of Gene Autry 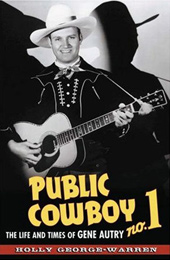 Author Holly George-Warren offers the first serious biography of Gene Autry, one of the true early giants of American popular culture, in a fascinating narrative that traces Autry's climb from small-town farm boy to multimillionaire.

Here for the first time Autry the legend becomes a flesh-and-blood man – with all the passions, triumphs, and tragedies of a flawed icon. George-Warren recounts stories never before told, including revelations about Autry's impoverished boyhood, his adventures as an up-and-coming singer, and the impact his enormous success had on his personal life. She describes Autry's loving but doomed mother, who died on the brink of her son's success, and his ne'er-do-well father, who married numerous times and wandered the West. Autry battled his own demons but emerges here in a positive light, an immensely personable man, one of America's most charitable benefactors, known for his boundless generosity, and a patriot who enlisted during World War II. The book provides equally colorful details of Autry's lengthy radio and recording career, which included such classics as "Back in the Saddle Again" and "Rudolph the Red-Nosed Reindeer"; his movie career, where he breathed new life into the Western genre; and his role in early television, being the first movie star to develop his own TV shows. And along the way, we see how he invested shrewdly in radio, real estate, and television, becoming the owner of the California Angels and founding the Gene Autry Western Heritage Museum – which today is named the Autry Museum of the American West.

Based on exclusive access to Gene Autry's personal papers, as well as interviews with more than 100 relatives, employees, colleagues, and friends, this engaging biography brings to life a major Hollywood star – a man who, more than anyone else, put Western music and style on the American cultural map.

Holly George-Warren is an award-winning writer, editor, and frequent commentator on Western films, music, and fashion. A contributor to more than 40 books on popular music, she is the author of Cowboy! How Hollywood Invented the Wild West and coauthor of How the West Was Worn. She is coeditor of The Rolling Stone Encyclopedia of Rock & Roll and editor of Farm Aid: A Song for America. Her writing has appeared in the New York Times, Rolling Stone, Village Voice, and many other publications. An Adjunct Professor of Journalism at the State University of New York-New Paltz, she lives in the Catskill Mountains with her husband and son.

Back to Books Index

To buy any other available item, go to: Autry Museum of the American West

Reviews for the Gene Autry Biography

The Official Gene Autry Biography An Overview by Maxine Hansen